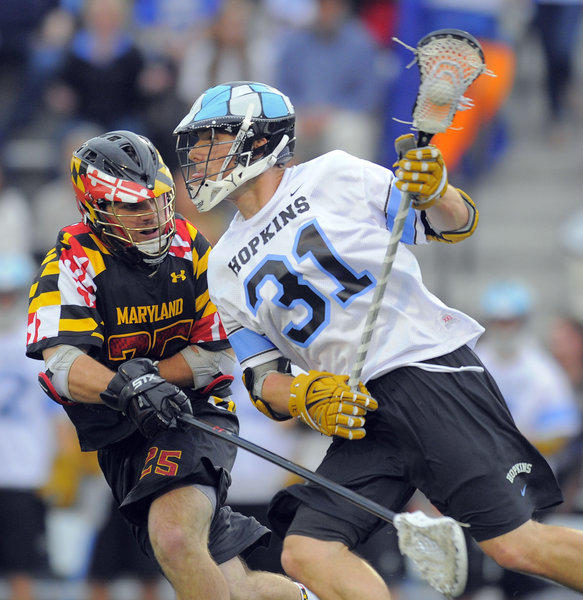 It’s been a wacky week in sports: a power outage at the Super Bowl, moms stealing national letters of intent, a previously listless Illinois team taking down #1 Indiana (I-L-L!) and the Big Ten’s next expansion target appears to be… Johns Hopkins University.  Let’s get to some conference realignment talk:

(1) Big Ten Expansion and Johns Hopkins – In a somewhat surprising bit of news, the Big Ten is apparently targeting Johns Hopkins as an associate member for lacrosse.  Adding Johns Hopkins on top of Rutgers and Maryland would give the Big Ten the minimum number of teams for both men’s and women’s lacrosse (6) to garner an automatic NCAA Tournament bid.  This has brought up the question as to whether the Big Ten would consider other associate members, such as adding Notre Dame or Boston University for hockey or all of the Big West to improve baseball.  I don’t see that happening, though.  From my vantage point, Johns Hopkins is about as unique of a situation as it gets since (a) as noted, its addition is the difference between the Big Ten having an NCAA auto-bid lacrosse league versus having none at all, (b) men’s and women’s lacrosse are the only sports that Johns Hopkins plays at the Division I level (all of its other sports are in Division III), so they would technically be an “all-sports” member for the Big Ten since it is providing “all” of the sports in which the conference sponsors a league (unlike Notre Dame or BU that obviously play at the Division I level in other sports), (c) Johns Hopkins happens to be an elite lacrosse power, so their combination with Maryland would instantly make the Big Ten into a top notch league in that sport and (d) in terms of academics and research funding power, Johns Hopkins is about as top notch as you can get outside of the Ivy League, which means that they can provide further gravitas to the Committee on Institutional Cooperation, which is the academic research consortium of the Big Ten and the University of Chicago.  All of those factors make Johns Hopkins into a unique expansion target for the Big Ten that I don’t believe would apply to other potential associate members.*

(* Note that the College Crosse blog has a fairly skeptical view of the Johns Hopkins/Big Ten marriage occurring because it believes that Johns Hopkins holds the leverage here.  That’s a pretty fascinating lacrosse-centric viewpoint where there is actually a bizarro world where Jim Delany could be considered to be completely powerless while much of the rest of the conference realignment universe believes that he can bring the likes of North Carolina and Florida State to their knees.  All I know is this: whatever ESPNU might be paying Johns Hopkins for lacrosse games probably wouldn’t cover a day’s catering bill at the Big Ten Network.  If Johns Hopkins turns down a Big Ten offer, it certainly won’t be because of TV money or exposure.  The College Crosse analysis is focused upon the on-the-field element and concludes that the Big Ten supposedly doesn’t offer Johns Hopkins anything worthwhile, but it’s unlikely that the school is examining this conference option for any competitive reason.  Instead, it’s about an possible offer to be part of the most powerful conference and brand in college athletics on the basis of a single sport that isn’t football or basketball along with being the only school that the league has ever granted an associate membership to.  That’s an invitation that the vast majority of university presidents and athletic directors in this country would kill for.  We’ll see how Johns Hopkins approaches this going forward.)

Now, what does the prospect of adding Johns Hopkins mean for Big Ten expansion overall?  One school of thought is that adding Johns Hopkins and a Big Ten lacrosse league would make it more palatable for Virginia and North Carolina to consider the Big Ten (as they have powerhouse lacrosse programs that have greater influence on campus than their revenue might indicate).  The other viewpoint is the flip side, where the Big Ten wouldn’t be considering the addition of Johns Hopkins at all as an associate member if it believed a larger expansion that included UVA and/or UNC was imminent.  I tend to favor the latter point of view.  As much as I see the benefits listed above with adding JHU for lacrosse, I highly doubt it would be happening if the Big Ten thought that more full members with their own lacrosse members would be joining at any point in the near future.  That doesn’t mean that UVA or UNC won’t ever join the Big Ten, but the talk about Johns Hopkins is a bit of a canary in the coal mine on the overall status of conference realignment as of now.

(2) Potential Catholic 7 Fallout – We’ve spent most of our time here lately focused on the large potential realignment earthquakes with the power football conferences along with analyzing who might the 7 Catholic schools splitting from the Big East (AKA the “Catholic 7” or “C7”) might add to their new basketball-centric league.  However, we haven’t really examined the potential fallout from the formation of the new C7 league, which may very well affect every single Division I basketball conference that doesn’t sponsor FBS football.  While I’m an ACC Armageddon skeptic, there should be little question that the basketball conference landscape is going to get smashed as soon as the C7 announces who they’re adding (and that could happen any day at this point).

The C7 still appears to have Xavier and Butler as locks to be additions with some combination of 3 of Creighton, Dayton, St. Louis and VCU.  (My semi-educated guess is that VCU will end up being left out as a result of being a lack of an institutional fit.)  In any scenario, the Atlantic 10 is going to end up losing a crippling chunk of top programs, while the Missouri Valley Conference is at risk of losing its top breadwinner, as well.  Will the A-10 end up attempting to raid the MVC or vice versa?  Could both the A-10 and MVC start fighting over programs from the Horizon League (e.g. Loyola and/or my parents’ alma mater of UIC in the Chicago market)?  Will the Colonial Athletic Association get poached by the A-10 again (e.g. George Mason and/or Northeastern)?  Who would the Horizon and CAA end up raiding for replacements?  Missouri-Kansas City (UMKC) just announced today that it is leaving the relatively geographically friendly Summit League for the spread out WAC that has been life support, which makes no sense on paper… unless they believe that the Summit will get picked apart after the C7 makes their move. The number of permutations is endless, so it’s tough to even wrap my mind around how all of these conferences are going to react to the C7’s final decision.  It’s particularly curious that there really isn’t any indication whatsoever as to who the Atlantic 10 would be interested in when they inevitably need to backfill their membership (assuming that they even want to stay as a 14-school conference), so it’s difficult to reasonably predict who will be moving despite the fact that there will likely be dozens of schools shifting leagues.  I’m going to give this some more thought, but I’d be interested to see what you (as the readers of this blog) believe will happen since (a) it’s uncharted territory and (b) much more imminent compared to FBS power conference moves as of now.

(3) My Vote for the Name of the C7 League: “The Classic East” – Assuming that the C7 won’t be able to keep the Big East brand name for their new league (which is still an item that’s up for negotiation), there have been a number of religiously-related names suggested out there, such as “The Vatican League” or “The Big Priest”.  However, I came across a suggestion from a discussion on VUhoops that I believe is brilliant: “The Classic East”.  It’s a name that gives the C7 league a new and separate identity yet still evokes the tradition and history of what the old Big East used to be.  Think of how the Coca-Cola Company backtracked on its “New Coke” disaster and brought back its original cola formula as “Coca-Cola Classic”.  Anyway, that’s my vote if the Big East name stays with the football schools.

Enjoy the weekend and let’s hope the Illini can keep building upon tonight’s massive win!