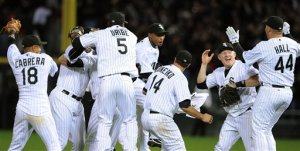 Due to work constraints, I was limited to listening to pieces of the extended regular season of the White Sox over the last two evenings on the radio.  Even though the one-game playoff to determine the AL Central championship turned out to be what one of my friends thought was the best baseball game that he had ever seen as a Sox fan (even better than Game 1 of the 2005 World Series, in his opinion) and I wasn’t able to watch it, I haven’t stopped smiling for hours.  (By the way, the Twins over the course of this season have secured a place with Indiana, Michigan, Packers, and Pistons on my list of hated sports teams.  Call me heartless, but I derive great joy out of seeing this team full of virtual David Ecksteins get squished like the gnats they are.  We’ll see how well the Twins’ baseball philosophy will work when they move out of that indoor Hefty bag-walled shag carpet facility and into an actual ballpark.)  The past week for the White Sox has been a microcosm of the past season – looking completely listless and failing at all facets of the game during a critical series and then turning around a couple of days later to put together almost picture-perfect baseball.  As a result, I wouldn’t be surprised if the Sox proceed to get swept by the Devil Rays or the South Siders go on a 11-1 run a la 2005 – we’ve gone through 163 games and no one has any better read on this team today compared to Opening Day.

As tense as the regular season was, the one thing that I’ll look forward to this postseason is that I almost have a loose feeling as a result of the White Sox winning the World Series three years ago.  This isn’t to say that I’m complacent or satisfied – I’ll be throwing inanimate objects at my television this month as much as ever.  However, there isn’t the extra checked-in luggage full of bad history and karma making me wonder if I will ever live to the see the Sox win it all.  Instead, all Sox fans can simply focus on this particular team and this particular year without worrying about a flurry of “Eight Men Out” clips.

Obviously, this isn’t going to be the case for my Cubs fan brethren, who will be subjected a continuous loop of billy goats, black cats, and Bartman for as long as the team is still playing in the postseason.  Let me say something nice about real Cubs fans for once (by real, I mean people like Minneapolis Red Sox, TK, Marc, Ted Lilly Fan Club, and many others out there as opposed to the Big Ten Greek Reunion/Iowa tour bus “Wrigley Field fan” crowd) – their loyalty is the envy of every other sports fan base in the country, they break the stereotypes of the lackadaisical fans that supposedly only enjoy the beer garden atmosphere of Wrigley by taking over opposing teams’ stadiums all across the country, and, at the end of the day, truly deserve to get the payoff of a world championship.  Anyone that believes that real Cubs fans are part of a happy-go-lucky fan base that doesn’t care about whether their team loses is either ignorant or completely blinded by anti-Cubs bias.  As a White Sox fan that lived steps from Wrigley Field on the evening of Game 6 of the 2003 NLCS, I realized that no fan base that gave that much should endure that type of pain (well, except for those Hoosier Satan’s Spawn enablers).

Which brings us to the fact that will surely be repeated almost as much as the Cubs House of Horrors clip show – this year will be the first time that both Chicago teams are in the postseason in 102 years.  In contrast, the Mets and Yankees both made the postseason for New York in 2006, the Dodgers and Angels made it for Los Angeles in 2004, and the Giants and A’s made it for the San Francisco Bay Area in 2003.  The magnitude of the Cubs and Sox simultaneously being competitive, much less actually making to postseason play, cannot be understated.  This is a town that has had such a dearth of good baseball teams over the years that it still celebrates famous collapsers/underachievers such as the ’69 Cubs, ’83 Sox, and ’84 Cubs (I can’t imagine New Yorkers building statues and naming streets after the 1995 AL Wild Card Winner Yankees).  To suddenly have the prospect of a repeat of 1906 (where, by the way, the Hitless Wonder White Sox shockingly upset a Cubs team that still has the best single season record in history) is beyond the realm of comprehension for any Chicagoan.  Just to be safe, I’m moving myself, the wife, and the cat to the basement until the end of the month with a power generator on standby.  Of course, I’m willing to put up with Armageddon if it means seeing an all-Chicago World Series… as long as the White Sox come out on top.