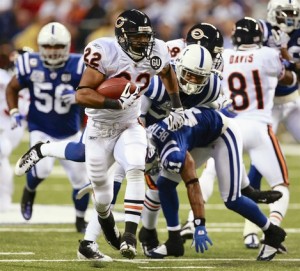 Like Michael Corleone, every time that I think that I’m out with the Bears, they pull me back in.  After writing a screed last week about how this is probably the least excited that I’ve been for an upcoming Bears season, they of course go out an pull off a monster upset on the road on national television.  After a few days of being drunk off of the Matt Forte Kool-Aid, a couple of things have brought me down to Earth.  First, it was remembering the occurrence of a punchless group of Bears heading into Green Bay on Sunday Night Football last year and administering an upset on par with the one this past Sunday evening, with Lovie Smith’s crew then dumping its offense into quicksand shortly thereafter.  Second, this David Haugh column in the Chicago Tribune goes over some pretty poor recent years for the Bears that followed an unexpected wins in the season openers.  Couple that with the fact that the second game of the year is at Carolina, who is coming off their own unexpected road win at San Diego, and it’s apparent that we’re not in the clear as of yet.  Well, at least I can proceed under the guise that we are at least playoff contenders in some form or fashion.  On to this week’s pro parlay picks (home teams in CAPS):

(1) Green Bay Packers (-3) over DETROIT LIONS – Let me just say that I loathe picking the Packers at any point in time, but the oddsmakers have left me no choice for the second week in a row.  The Lions just lost by 13 points to an Atlanta team that featured a rookie starting the first game of his career and allowed LaDainian Tomlinson’s old backup to run for 220 yards.  As I stated yesterday, I’m not one to question Vegas bookies, but I don’t see how this spread could be less than a touchdown in favor of Green Bay.  So, I’m giving the points here.

(2) New Orleans Saints (pick ’em) over WASHINGTON REDSKINS – I’ve always liked the home field advantage for the Redskins, but that only takes you so far.  It’s possible that Washington played as horribly as they could have played last Thursday night, yet it’s more possible that they are simply horrific this season.  Getting to lay money down on the Saints’ offensive machine against this lackluster ‘Skins team straight up is a gift.

(3) CAROLINA PANTHERS (-3) over Chicago Bears – Let me preface this pick by saying that this isn’t for reverse jinx purposes, although I’ll gladly fall on my sword in real life here.  As I alluded to above, the Panthers themselves came away with an impressive road win against a superior-on-paper AFC opponent last week just like the Bears.  I don’t think that the Panthers (regardless of the presence of Steve Smith) are necessarily better than the Bears, but they are close enough talent-wise that I believe that the home field will be determining factor.  If this game were to be played at Soldier Field, I’d take the Bears, yet since it’s in Charlotte, I’ve got to give the points.

I’ll be enjoying the weekend in lovely Champaign and checking out the newly renovated Memorial Stadium.  Hopefully, Illinois won’t have too many problems with the Ragin’ Cajuns.  Have a great weekend and Go Bears, Go White Sox, and Go Illini!