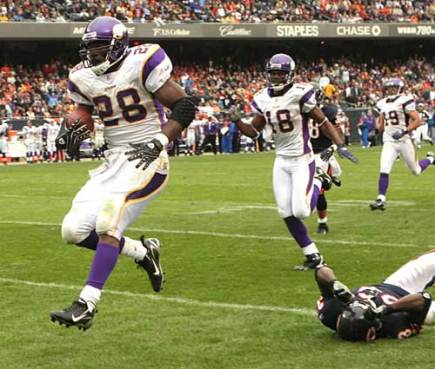 After having a beautiful double revenge of the FIBs over the Badgers and Packers last week, it was followed up with one of the worst football weekends in the Frank the Tank household in awhile with the Illini and Bears both losing games that were more than winnable.

I noted last week that the road trip to Iowa City for Illinois was going to be a proverbial trap game since Kirk Ferentz just seems to have our number and that proved to be more than correct in an ugly 10-6 loss. The Hawkeyes kept our running game in check while we had virtually no passing attack until Eddie McGee came in to close out the game. Despite the fact that McGee threw a poor interception in the red zone on the final Illini drive that probably would have turned the outcome of the game the other way, his passing skills to even get Illinois into that position (as well as a gem of a throw to Joe Morgan – who has always thought that Ryne Sandberg and Roberto Alomar could never hold a candle to him as second basemen – for an 82-yard touchdown that was called back on account of an illegal formation penalty) is forcing Ron Zook to start out all of his press conferences with a “Juice is our quarterback” speech.

Speaking of the Zooker, the recipient of a new contract extension from Ron Guenther made a few calls that must have had Florida Gators fans giggling by choosing to accept penalties on third down as opposed to declining them to force fourth downs not once, but twice. The first time backfired into the only touchdown by either team in the game, while the second time resulted in an Iowa first down conversion. This made me flashback to last year’s game against Indiana when Zook decided to go for a 2-point conversion on the first touchdown in the first quarter of the game for absolutely no reason at all, which we subsequently failed on (and we of course lost the game by 1 point). Now, I love that Ron Zook has brought Illinois back to football respectability way ahead of schedule, but these calls are just simply off-the-wall – it isn’t even about overall technical game strategy, but rather plain-old common sense. Anyway, the Illini are still in line to get to a pretty good bowl, but in order to make the Rose Bowl now, we’re going to have to win out for the rest of the season (which means beating Michigan in a monster prime time game next week and #1 Ohio State in Columbus). The fact that this is still a possibility shows how far Illini football has come over the course of the year, yet it’s still tough to stomach that we lost a very winnable game on Saturday.

The Bears, of course, couldn’t help but to pile onto that frustration on Sunday. Ever since the Vikings selected Adrian Peterson in the NFL Draft last spring, I’ve been telling everyone that would listen to me that Minnesota is the team that scares me the most in the NFC North since he’s such a special player. Well, he backed my thoughts up and then some by just shredding the Bears’ defensive and special teams units.  Honestly, I believe that Peterson is better situated to become an NFL superstar than even Reggie Bush since the former Sooner has the size and strength to pound the ball inside as an every down back as well as having breakaway speed to the outside and past the line of scrimmage.  I have no clue as to why Minnesota is still having him split carries with Chester Taylor.  While Devin Hester did everything he could to keep the Bears in the game with yet another touchdown return and finally getting an offensive pass play call for him that worked perfectly for another touchdown (I’m pretty sure that the Bears can just have Hester sprint down the field all day and he’ll burn anyone that’s on him), the rest of the team just couldn’t contain Peterson.  This season just has a bad feeling to it – the Bears  improbably stormed back with two touchdowns against the Vikings in four minutes to tie the game only to blow it within the final minute and a half.  Can the Bears go 8-2 the rest of the way to get to the 10-6 level that will probably be required to make the playoffs?  Unfortunately, I don’t have much faith in that (and even more unfortunately, I’ll continue to watch since I’m a glutton for punishment).

Let’s get off of the depressing news with some links:

(1) And Simpson Makes Four! (Mark Tupper Weblog) – After a year of continuously grim recruiting news for Bruce Weber and Illini basketball, this past weekend saw oral commitments to Champaign from four high-profile recruits.  Will this answer all of the concerns about Weber’s recruiting skills?  Let’s hope so.

(2) Indiana Punishes Sampson Over Recruiting Calls (ESPN.com) – Speaking of old oral commitments from recruits to Weber, have I ever told you how much I hate Satan’s Spawn?

(4) Can Anyone Explain Dane Cook to Me? (Freakonomics Blog – New York Times) – If University of Chicago economists can’t figure this out, there’s no hope for the rest of us.

Alright – I’m officially excited.  When I wrote my college football preview a few weeks ago and predicted a Motor City Bowl appearance for the Illini (which plenty of people at the time thought was a monster stretch), I didn’t think in my wildest dreams that they would do so well that the most important football game between teams from Illinois and Wisconsin this past weekend would end up taking place at Memorial Stadium in Champaign as opposed to Lambeau Field in Green Bay (the Bears are slowly redeeming themselves, but that’s a post for another day).  Now, I’m clearing out my holiday calendar with the real prospect of Illinois making a top tier bowl.  While we are a long long way from legitimately talking about a Rose Bowl with games against Michigan and Ohio State still coming up, let’s just say I’ll break the bank to make it to Pasadena if that ever happens.  Honestly, next to an Illini national championship in basketball, watching the Illini in the Rose Bowl is my top sports wish – as much as I love the Bears, White Sox, and Bulls, seeing Illinois finally finish at the top would mean the most to me personally.

What I love about how the Illini are playing right now is that these are anything but fluke wins.  I got to witness the victory against Penn State a couple of weeks ago in person, which meant that I also got to attend the coming out party for my favorite athlete in the world today outside of Devin Hester:  Arrelious “Rejus” Benn.  I’m not sure how Ron Zook is getting top recruits such as Benn and Vontae Davis to come from Washington, D.C. to Champaign, but it needs to continue.  Rejus is the type of guy we would always see across the line in a Wolverine or Buckeye uniform before – a huge wide receiver who will also burn the best cornerbacks (and also in the case against the Nitanny Lions, the best special teams units) out there.  Anyway, considering that Benn is only a month into his college career, he has a pretty good chance of becoming the best athlete that I have seen in an Illini uniform for either football or basketball (even more so than Deron Williams) if he keeps up this pace.  The only thing with having such a talent is that he may have a short stay in Champaign he could very well be a top ten NFL draft pick after playing the minimum of two years in college.

As starry-eyed as I am with Rejus, it’s Rashard Mendenhall and the Illinois running game that’s really the team’s catalyst in rolling over teams.  Sure, Wisconsin might have been the second most overrated number 5 team in country this season (after our good friends at the University of Michigan), but can you believe that we put up another 289 yards on the ground against them?  I was brought up on old-school smash mouth Chicago Bears and Big Ten football, so there’s nothing more beautiful to me than watching the Illini just ram the ball down people’s throats.  Quarterback Juice Williams might still be throwing the ball as if he spent the summer at the Rex Grossman Passing Clinic, but the boy (along with his backup Eddie McGee) can still run like he stole something.

So, it’s going to be the middle of October and Illini football is still relevant.  There’s the proverbial trap game next week atIowa – as bad as the Hawkeyes might be playing this year, Kirk Ferentz seems to have our number – and if we survive and advance there, it makes the prime time game against Michigan into the biggest game in Champaign since, well, the most horrific sporting event that I have ever attended in person.  When we’re six weeks into the season and we’ve already won more games in 2007 than the past two years combined, Illini fans are entitled to some irrational exuberance.  I know I’m there.