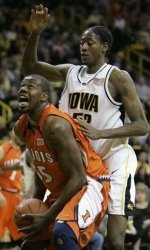 Illinois managed to muck up another critical road game at Iowa on Saturday, which means that the Illini blew an opportunity to solidify its NCAA Tournament profile and put themselves on the tenuous bubble that’s occupied by Big Ten counterparts Michigan State, Purdue, Michigan, and the aforementioned Hawkeyes.  Michigan State really ought to be in the NCAA Tourney with its wins over Ohio State and Wisconsin, but they also only managed one Big Ten road win this year, so they aren’t necessarily completely secure.  One win in the Big Ten Tournament at the United Center this week (an event which, in a conference move that I heavily criticized last year, will be moved to Indianapolis until at least 2012) ought to remove any doubts on the Spartans.  On the other end, Michigan and Iowa are going to probably need to at least get to the Big Ten championship game to be able to get an invite to the dance, if not outright win the conference’s automatic bid.

That leaves Illinois and Purdue who have virtually identical NCAA profiles in terms of RPI and schedule strength along with matching Big Ten conference records.   As of today, it’s tough not to put the Boilermakers slightly ahead in a head-to-head with the way that they slashed the Illini in West Lafayette back in January.  At same time, the Illinois meltdown at Iowa on Saturday forces the Illini to have to play a Thursday first round game against Penn State in the Big Ten Tourney as opposed to taking advantage of a bye that’s now going to Purdue.  The upshot here is that even if Illinois beats Penn State, they’re also going to have to get past Indiana on Friday for a second win to really get into decent position on Selection Sunday.  Purdue, on the other hand, only needs one win versus Iowa on Friday in order to feel pretty good in terms of an NCAA bid.

Honestly, with everything that has happened to the Illinois program this season, we’re lucky to be even in a position to make the NCAA Tournament right now.  What’s keeping us alive right now is more of what we have avoided (any bad losses to sub-50 RPI teams), than what we have achieved (the best wins this year have been against Indiana and Michigan State, which aren’t exactly marquee victories).  Still, it was incredibly frustrating to watch the Illini just not execute in such a critical game on Saturday.  Instead of giving Illini Nation a breather this week by taking care of business against the Hawkeyes, the Illinois basketball team has put us on edge once again.