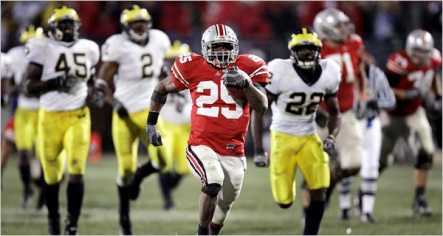 It’s been a wacky week leading up to Turkey Day, with Rupert Murdoch and Fox, of all people, coming to their collective senses for once by deciding that a special and corresponding book where O.J. Simpson goes through a “hypothetical” rendering of how he would have killed Nicole Brown-Simpson and Ronald Goldman is a bad idea, Michael Richards of Cosmo Kramer fame spewing out the N-word on stage over the past weekend and then gets laughed at in the middle of his apology on David Letterman, the Cubs organization opening up its wallet to sign Alfonso Soriano until he’s eligible for Social Security, the Jets attempting an onside kick at the opening of the 2nd half that didn’t work against the Bears, Northwestern attempting an onside kick at the opening of the 2nd half that worked perfectly against Illinois, an Ohio State-Michigan rematch for the national championship being a distinct possibility after a classic game on Saturday (although USC needs to lose one of its last two games, forcing the Wolverines to switch gears and having to cheer for Notre Dame this weekend), and Suri Cruise no longer has parents out of wedlock. Despite of all that, there are still plenty of links out there for your Thanksgiving weekend:

(1) Steve Milton: The Rubber Industry’s New Best Friend (Chicagoist) – At some point in my lifetime, the Guiness Book of World Records went from being a collection of outstanding human achievements such as getting to the top of Mount Everest the fastest or the having the longest long jump in international competition to morph into a freak show that honors the carnie that can cram the most piercings into his belly button. That being said, this rubber band ball is pretty sweet.

(2) Macy’s Brands the Holidays (Wall Street Journal) – The only thing that could be worse than the feeling that I had walking by the old Marshall Field’s on State Street the other day to see a bunch of red Macy’s banners all over the place is the thought of someone putting a huge spaceship in the middle of Soldier Field. Oh wait…

(3) Q and A with Will Carroll (Siberian Baseball) – Minneapolis Red Sox had a great session on the gyroball with a contributor to Baseball Prospectus.

(4) White Sox Top 10 Prospects (South Side Sox) – Speaking of baseball, here’s a summary of the top 10 prospects in the White Sox farm system.

(5) Time To Bring On Tougher Challenges (Mark Tupper Weblog) – The schedule has been pretty easy for Illini basketball so far, but it’s going to kick into high gear with games against Maryland and Arizona last week. Rich McBride looked sharp last night coming off of his suspension for impersonating a Portland Trailblazer.

(6) You’re Beautiful (Linda) – My talented sister had a show at the MFA Gallery at Montclair State (I’m not sure which exit that is in Jersey) this week. In case you were wondering, I received absolutely NONE of the artist genes that run in the family.

(8) Bowing Down to the Golden Calf (Fleece the Pig, Flog the Pony) – Another year, another disasterous Circus Trip for the Bulls. I will never understand why Jerry Reinsdorf and Bill Wirtz don’t use their pull to get Ringling Bros. to come to the United Center during the summer when the building is empty as opposed to the very beginning of both the basketball and hockey seasons.

(9) Bush’s Daughter Robbed in Argentina (Washington Post) – A theft that’s pulled off right in front of a bunch of Secret Service agents? Now that’s something that truly deserves an entry into the Guiness Book of World Records.

(UPDATE: For even more entertainment, via a Deadspin tip, Gilbert Arenas has his own blog now and it’s highly recommended reading.)