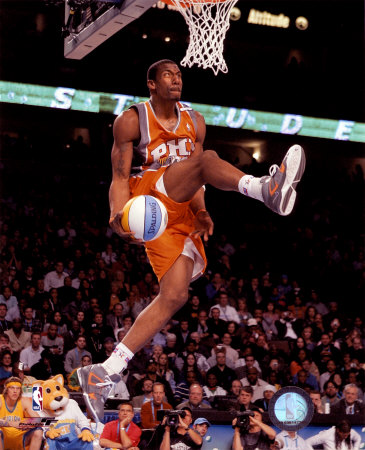 There were two main choices for topics of today’s post: A-Rod’s positive 2003 steroid test and half-assed admission or unsubstantiated rumors of the Bulls pulling off a trade with the Suns for Amare Stoudemire.  If it took you more than two seconds to figure out which direction I’m going, you must be a newbie.  This blog wouldn’t exist without posts about Bulls rumors that I ruminate on for several hours and then are made obsolete within three days.  (Please see Exhibits A and B.)

On the scale of trade rumors, though, this one is a relative biggie.  There are some knocks on Stoudemire – he’s not a great defender and supposedly he has some attitude issues.  I’ll be the first to say that he’s not a perfect player, but if the Bulls are giving up Tyrus Thomas (the young athletic big man with upside), Drew Gooden (with the magical expiring contract), and Cedric Simmons (another expiring contract) in this situation, John Paxson needs to pull the trigger pronto.  The fact that this trade works on the NBA Trade Machine (which basketball fans understand is the most difficult hurdle to overcome in any trade) almost means that it’s destiny.  Even if the Bulls had to throw in a first round draft pick on top of all of that, I think that they have to do it.

The reasons are pretty simple: 6′ 10″, 26 years old, and career averages of 21 points and 9 rebounds per game over six seasons in the NBA.  Stoudemire is the Bulls large scoring presence (even if he’s not a true post player) that they have been looking for since trading Elton Brand.  It’s incredulous that some Bulls fans are starting to be hesitant on moving Tyrus Thomas since he’s had a good road trip averaging around 15 points per game, but let’s note that this is the very best stretch of basketball that we’ve ever seen him play and it’s still 5 points less per game than Stoudemire’s career average.  I would much rather see Joakim Noah moved (although Steve Kerr knows better) and absolutely love Thomas’ athleticism and potential, yet I have an extremely hard time envisioning him ever becoming close to a 20/10 player.  If John Paxson’s professional analysis yields the same conclusion, I can’t see how he could possibly not move forward with this type of deal.

Players of the caliber of, say, LeBron James or Dwight Howard are rarely (if ever) traded, so Bulls fans that are against Stoudemire coming to Chicago because he has a couple of holes in his game are failing to see the proverbial forest for the trees.  Every guy on the trading block is going to have some issues, but Stoudemire is about as good of a player that you’re going to see get reasonably traded in this day and age.  The Bulls were looking at moving Luol Deng in exchange for Pau Gasol over the past couple of years.   Well, Thomas isn’t nearly as valuable to this team as Deng, while Stoudemire is arguably a more dominant player than Gasol.  Pairing Stoudemire up with Derrick Rose makes the Bulls at least a top 4 team in the Eastern Conference almost immediately.  They wouldn’t beat the Cavs, Magic, or Celtics this year, but I’d take my championship chances two to three years from now when both Rose and Stoudemire are in their prime years at the same time over any combination that the Bulls have on their current roster.  Plus, if the Bulls are still looking to make a legitimate run at one of the marquee 2010 free agents (assuming that they can make the salary cap situation work since Stoudemire himself will demand a max contract), offering a Rose/Stoudemire/Deng nucleus is going to look about as enticing as what any other team could offer.

Don’t dash my Bulls trade dreams for the umpteenth year in a row, Pax.  It’s time to make a move and it looks like the pieces are there where it could legitimately happen.

(Image from All NBA All Basketball)

2 thoughts on “Another Day, Another Bulls Trade Rumor”