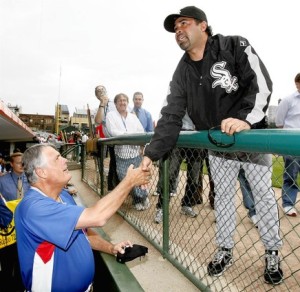 A couple of weeks after this year’s Rose Bowl, I wrote a long post lamenting the state of the teams that I root for, stating that “none of my teams are going to be playing any games of real meaning from now until the Illinois football team suits up to play Missouri on Labor Day weekend.” I also said this about the Bulls: “[A]s a Bulls fan, do I want this team to stretch to grab the seventh or eight seed in the Eastern Conference so that it can be shellacked by Boston or Detroit in the playoffs, or would I rather roll the dice and see if we can get O.J. Mayo or Derrick Rose in the United Center on a full-time basis next season? Call me crazy, but the latter option is more appealing to me at this point.”

Well, for for the second straight weekend, the White Sox are playing the Cubs with both teams being in first place. Granted, the sweep of the Sox by the Cubs last weekend emphasized the fact that the North Siders, I’ll admit begrudgingly, have the most consistent top-to-bottom team in baseball this season. The White Sox are just an all-or-nothing team – they’ll either bash in double digit runs powered by multiple home runs or have a complete power outage. Fortunately, the pitching staff (both the starting rotation and the bullpen) has kept the team in pretty much every game, but for narcissistic Sox fan base, it’s disheartening to watch a 6 1/2 game lead over Minnesota dissipate in the span of a few days. (I don’t hate the Twins in the same manner as the Packers, Pistons, or Hoosiers, but they might be the most annoying team that I could think of, if you know what I mean. The Twins don’t actually have David Eckstein on their team, yet it’s as if though they’re marching out nine clones of him every evening. As great as they are to fawning analysts, I always get a perverse delight when they’re squashed like a group of gnats later in the year.) Nevertheless, the White Sox are performing about a million times better than I could have ever expected by this point in the season, all the while Ozzie Guillen continues to spout off about the rats at Wrigley Field. With the teams on both sides of town performing so well (I just had suck it up and buy a few tickets to a Cubs game from a broker for a friend coming into town that wanted to see Wrigley – let’s just say that ticket resellers can tell me how my ass tastes), I’ve been steadily stocking up my basement with non-perishable goods, supplies of water and transistor radios just in case the previously unthinkable event that once occurred in 1906 comes to fruition.

Meanwhile, the Bulls have been the biggest winners of them all as they have officially taken Derrick Rose with the number one pick in this year’s NBA Draft. As I’ve said before, I think he’s got the goods to be even better in the end than both Chris Paul and Deron Williams (and this is coming from someone who has a picture of Deron shooting the game-tying three from the 2005 NCAA Chicago Regional Final permanently ingrained as his laptop background), which translates to the Bulls finally having a legitimate superstar once again. I hate using too many superlatives, but I believe that we’re going to look at footage a decade from now of the Bulls winning the lottery last month and Derrick Rose heading up to the podium tonight and point to this time as one of the most important moments in Chicago sports history. The impact of superstars in the NBA can’t be underestimated, which the Bulls know better than anyone since they once had the biggest megastar of them all, and by all indications Rose is going to get to that level.

So, when this Labor Day weekend comes around, I’ll still be blanketed in orange when the Illini take on Mizzou in what will be the most important non-conference football game that Illinois has played since I went to school there. However, I have hopes that I’m also following a baseball pennant race on both sides of town along with anticipating the opening of Bulls training camp. As for the Bears… I’ll just stop pushing my luck right now.

(Images from Chicago Tribune and ESPN.com)