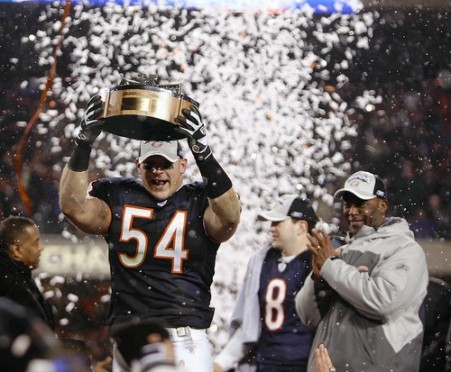 My very earliest sports memories were from the 1985 Bears season when I was 7 years old. After witnessing that Bears team demolish the Patriots 46-10 in Super Bowl XX, my naive young self believed that this was something that was supposed to happen every year for the City of Chicago. Little did I know that the primacy of that Super Bowl victory in my life would cause me to have unreasonable expectations for the Bears for the next 2 decades. While I was able to rationally deal with ugly performances of the Bulls (such as the sight of 5 pasty white guys on the court at the same time the year after the second Michael Jordan retirement) and White Sox (the Albert Corky Belle years) when they fielded subpar teams over that period of time, it didn’t matter whether Peter Tom Willis, Cade McNown, Moses Moreno, or anyone else from this awful list was starting at quarterback at Soldier Field – I was angry everytime that the Bears lost a game, which meant that I spent a good amount of time over the past 21 years sulking through entire NFL seasons. The Illini football and basketball teams are the only others that affect me in this way, so it’s a wonder why I’m not the youngest person to ever have to receive an angioplasty.

Considering this personal history, as much as the media wanted to spend the next 2 weeks bombarding us with stories about how the Saints have single-handedly rebuilt all of the broken levees and dilapidated houses in New Orleans (a reporter from the Chicago NBC affiliate thought that the Bears beating the Saints would be as popular outside of the Windy City as “killing Bambi”), I knew deep down in my heart that the Bears couldn’t possibly screw me again. As I noted on Friday, I was confident heading into the game that the Bears had the “disrespect” card going for them and the Saints, while being a solid team, definitely didn’t deserve the disproportionate heapings of praise that they were receiving when they were only able to beat the Eagles by 3 in the Superdome a week ago.

While I was a bit nervous when Drew Brees began leading his offense down the field at the end of the first half and the beginning of the second half, the Bears ended up putting together one of their most complete all-around games of the entire season. Ron Rivera’s defense, after being uncustomarily maligned across town this past week, hammered down on the Saints’ running game and stripped the ball with reckless abandon. Sexy Rexy, even though he had only an average game stats-wise, made a number of key throws and was aided by some outstanding catches by our receivers (particularly Bernard Berrian’s circus catch on his back for a touchdown). Most importantly, the Bears running game was established early and implemented often, with the Thomas Jones – Cedric Benson tandem peaking at the right time.

The upshot is that I get to watch the first Super Bowl in 21 years where I have more than a bunch of money on squares on the line. I sincerely believed that we were destined to have a Super Bowl XX rematch (I was looking forward to footage of Richard Dent’s decapitation of Tony Eason on the field being played continuously over the next 2 weeks) if only because I thought that picking the Colts to actually win a meaningful game against the Patriots would be the equivalent of putting my life savings on black at the roulette wheel or Mark Prior starting more than 5 games next season. Nevertheless, I’m hoping that the endless Peyton Manning media orgy that we’re going to endure up until Super Bowl XLI will stoke the same fire under the Bears as the national fawning over the Saints did for the NFC Championship.

Lovie Smith made it a point over the past few days that his vision was for the George S. Halas Trophy to be handed to Virginia McCaskey, the daughter of that trophy’s namesake, on Sunday. However, Bears fans aren’t going to be satisfied until we get one more trophy this year, even if it’s named after an enemy Packer.

One thought on “Super Bears Kill Bambi (and Save Me)”