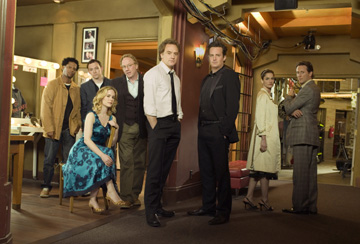 I’ll eventually get back to writing some full-fledged substantive posts once I have some time, but you’ll at least see a return of Frank the Tank’s Classic Music Video of the Week tomorrow. Until then, enjoy these links:

(1) Does Cubs’ New Star Have a Message from the Tribune? (New York Times) – With daily speculation about the Tribune Company breaking up its media conglomeration, a lot of people seem to believe that the recent spending spree by the Cubs is an indicator that the corporation wants to sell off the team since the club has had a reputation of being tightwads relative to its wealth. However, as Andrew Ross Sorkin (no relation to the TV producer Aaron, who I’ll be addressing separately on a completely different subject below) notes, this is completely counterintuitive in the business world and, specifically, the private equity world that the Tribune is probably heading into, where cutting expenses is paramount. If anything, the increased spending by the Cubs makes it less likely that the Tribune is going to part ways with the franchise (at least in terms of selling it off by itself without coupling it with other assets). My feeling is that while the newspaper operations of the Tribune, which are the source of the earnings pressure, will be split off in some fashion, the synergy of the Cubs, WGN Television, WGN Radio, and the partial stake in Comcast SportsNet Chicago is too lucrative and valuable as a whole to break apart into separate pieces.

(2) Critic Loses Giddiness for NBC’s Show ‘Studio 60’ (Chicago Tribune) – This article encapsulates my love-hate relationship with Aaron Sorkin. When “The West Wing” and “Studio 60 on the Sunset Strip” have been focused on the insider baseball workings of the respective subjects of politics and the entertainment industry, they have been among the most well-written and fascinating pieces of dramatic television anywhere. However, it seems as though Sorkin just can’t resist the opportunity to hammer the viewers over the head with his personal political views, which regardless of whether one agrees with him, are delivered in such a heavy-handed and preachy manner that he destroys the quality of his shows. Case in point is the example that Maureen Ryan refers to in her article, where Sorkin intimated in a recent “Studio 60” episode that there are people who can live for 50 or more years in that supposed “backwater town” of Columbus, Ohio (despite the fact that it is home to the largest university in the United States, the state capital of the 7th largest state in the country, and a burgeoning “creative class”, the city’s mere location in the Midwest clearly indicates to Sorkin that its population must be full of rubes) and never hear of Laurel and Hardy. (Note: This could very well be the only time that I will ever defend anything from Ohio on this blog, but it’s deserved on this point.) I’ve gone over before how much I oppose the social conservative agenda, yet comments such as these continue to give credence to the charges that Hollywood is full of liberal elites.

(3) Guard Play Awful; Work To Be Done (Mark Tupper Weblog) – Two years ago, the embarrassment of riches in the Illini backcourt with current NBA-ballers Deron Williams (who’s playing incredibly well this season for the Jazz so far), Luther Head, and Dee Brown catapulted the team to the national championship game. Now, it appears as if though Illinois is going to be shuffling around guards until Demetri McCamey arrives in Champaign next season. Granted, I knew there would be a number of painful evenings with the departures of Dee and James Augustine this year, but being able to watch the new team last night for the first time made me realize that we have a huge deficit in terms of being able to produce on the offensive end of the floor. It’s going to be even tougher this weekend on the road in Phoenix against an Arizona team that I believe can go the distance.

(4) Miracle Drug (Ron Karkovice Fan Club) – The Bulls’ back-to-back games against the Knicks couldn’t have come soon enough with all of the Ben Wallace headband wackiness. Once again, I give thanks to Isiah Thomas, the greatest GM in Bulls history.

(5) Crede Tale All About Cash and Dash (Chicago Tribune) – If the White Sox want to move its pillar at third base in Joe Crede as part of blockbuster package to bail Alex Rodriguez out of New York, that’s one thing. However, Crede for Chone Figgins isn’t going to make my heart flutter.

(6) Bears Road to the Playoffs (Windy City Gridiron) – As the Chicago media has commenced the inevitable frothing at the mouth to yank Rex Grossman for Brian Griese, the larger picture is that the Bears are still in command to secure homefield advantage throughout the playoffs. On a related note, notwithstanding the excellent play so far of Eastern Illinois alum and Jessica Simpson boy-toy Tony Romo (let’s not forget that Rex got off to a similarly hot start this year before NFL teams got enough video of him to pick him apart), my feeling is that the Cowboys are paper tigers on a hot streak that they cannot maintain and aren’t a long-term threat. The one real NFC challenger in my eyes is Seattle with a healthy tandem of Matt Hasselback and Shaun Alexander back in the fold. I don’t want a Seahawks version of last season when the Bears destroyed the Panthers during the regular season only to get subsequently smoked by Steve Smith at Soldier Field in the postseason.

(7) Snoop Dogg Arrested, Again (Washington Post) – I thought it was standard operating procedure to carry your piece onto the Tonight Show.