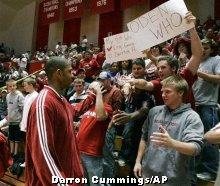 When I heard the news on Friday that Eric Gordon, the top-rated shooting guard in the nation for the high school class of 2007, was backing out of his oral commitment to Illinois in order to attend Indiana, I was ready to rip into a Tourettes-induced rant that would have drawn multiple fines from the FCC. After letting this situation simmer for a couple days, however, I’ve decided to pare down the ranting (although just a little) and instead have a question and answer session on the fallout from this mess and where everyone goes from here:

Q1: Should anyone be suprised by Eric Gordon’s decision?

A1: No. Although I was keeping up hope through the summer that Gordon wasn’t serious about the overtures from Satan’s Spawn, er, Kelvin Sampson, the longer that he refused to affirmatively reject to Indiana, the worse and worse it looked for Bruce Weber and the Illini. Mark Tupper also noted in his blog that Gordon was feeling incredible pressure in his hometown of Indianapolis to be the savior of IU, which certainly must have had a large impact on his decision.

Q2: Was Kelvin Sampson breaking any rules with his actions?

A2: As much as it pains me to say this, I would answer no. An oral commitment is not binding, so Sampson was in his rights to bombard Gordon with text messages and other sweet nothings such as hiring Gordon’s father’s college coach as an assistant. This is also assuming that Sampson didn’t use the same phone calling tactics that got him sanctioned by the NCAA back in May.

Q3: Notwithstanding any judgment regarding compliance with NCAA rules, is Kelvin Sampson a douchebag that can be proven to be the Spawn of Satan?

A3: Unequivocally yes. You can be technically ethical and playing within the rules yet still be a douchebag. Sampson has single-handedly made the oral commitment worthless in college basketball, which is going to have an derelict effect on the recruiting process from this point forward. As a result, that proves that he’s Satan’s Spawn on top of being an old-fashioned douchebag. (I’m keeping true to my word from a few months ago.) I know that Indiana fans are on a high right now, but let’s revisit how they feel when Coach K eats one of their oral commits in the future.

A4: With Gordon, Illinois would have been a legitimate national championship contender as long as he stayed in school. Without Gordon, the Illini still have a decent recruiting class coming out of the Class of 2007 led by point guard Demetri McCamey, but the expectations will have to be pared down considerably. I firmly believe that Bruce Weber is as good of an Xs-and-Os coach as anyone in college basketball today, so I have faith that he will the most out of each of his players and then some. The reality, however, is that you still need top tier recruits of you want to get past just being a tournament team to a perennial national championship contender. Even the Illinois team that made the championship game in 2005, which was the supposed superior “team” in contrast to North Carolina’s better “talent”, had its roots in a monster recruiting class from 2003, where Dee Brown was the top-rated point guard in the country coming out of high school. There’s no getting around the fact that you need both talent and hard work to reach the pinnacle.

Q5: Speaking of Bruce Weber, how much responsibility does he bear for losing Gordon?

A5: This is a situation where Weber can’t really be blamed per se for this happening, but every single question mark on his recruiting skills that were supposed to have been put to rest when he got Gordon to orally commit a year ago will now come back to the forefront with avengeance. While there were obviously a lot of factors in play in terms of Gordon backing out, it begs to question whether Satan’s Spawn, er, Sampson would have been able to lure the recruit away if Bill Self were the head coach instead. Even though I wish it weren’t true, I have a hard time believing that Self would have lost out to Sampson and maybe anyone other than possibly Coach K in this situation. More importantly, I doubt that Sampson would’ve even tried to do this against someone like Self in the first place. The perception right now is that Illinois is getting beaten in every single key recruiting battle. I don’t think Weber is a bad recruiter by any means, but the comparisons to his predecessor are going to be inevitable, particularly in light of the fact that a number of the top players that have come out of the Chicago area over the past few years that are playing in Lawrence rather than Champaign. Like I’ve said before, I’d put Weber in terms of pure basketball knowledge up against anyone. However, there needs to be a world-class recruiter at the helm of every top program, as well. There are definitely a lot of doubts as to whether Bruce Weber fits that mold and as long as that’s the case, Illinois is going to be vulnerable to this same situation again in the future.

Q6: Is there something wrong with obsessing over where some pimply-faced 17-year old high school kid goes to college?

A6: At a rational level, this answer should be yes. I certainly wasn’t ready to commit to anything at that age, so it’s tough for me to be angry at a child for not choosing the college that I attended. However, for better or for worse, those that follow college sports have a lot more pure emotions attached to their school as compared to pro teams. If one of your favorite baseball players ends up signing with the Yankees, you might feel jilted, but at some level you can rationalize it as a matter of the George Steinbrenner throwing wads of money around while eating his calzone for lunch. In the case of college recruiting, though, when a recruit chooses another school over yours, it’s as if though it’s a statement that your school is somehow inferior, which means that you take it a lot more personally. That’s why you see college message boards such as IlliniBoard buzzing with volumes of comments that dwarf equivalent pro team message boards. This isn’t a commentary of whether this is good or bad, but that’s the way it is. If you’ve been able to read this far in this post, you know that I’m as guilty of this as anyone.

Q7: What do Illini fans think of Indiana right now?

A7: Speaking for myself as an Illini fan, my disdain for Indiana before the Eric Gordon situation was rooted in a general hatred of Bobby Knight when he coached there. Since Mike Davis was such an awful coach and the Hoosiers took several steps back in recent years, the hate for Indiana had tapered off as of late.

After the events that just transpired with Eric Gordon, however, the Indiana Hoosiers have catapulted to a special pedestal: Frank the Tank’s most hated team in all of sports. Considering that the Green Bay Packers and Duke Blue Devils were at the top of the list before, that’s saying something. If there’s one silver lining in all of this, it’s that Illini fans can get off of our lame desire to make Michigan our rival and instead turn our hatred toward Indiana, a program that deserves it at a personal level and will also reciprocate it a bit. Make no mistake about it – I truly hate the Hoosiers now.

Q8: Where will Illinois basketball and Illini Nation go from here?

A8: Illinois is arguably the top basketball program in the nation that has never won a national championship. As a result, Illini Nation is essentially in the same state as Red Sox Nation before 2004, meaning that we’re neurotically obsessive about finally getting that championship for experiencing the glory while also shedding a century of baggage. That also entails us being hyper-hyper-hyper-sensitive about everything that happens with our program, ranging from huge events such as this Eric Gordon debacle to minor offhanded comments by Dick Vitale.

Nevertheless, Illinois basketball is a whole lot stronger than Eric Gordon or any other recruit. The very first substantive post that I ever wrote on this blog was entitled “The Paranoia of Illini Nation”, which was a call for Illinois fans to take a step back and try to become the classiest fans in college basketball as opposed to being the most petulant. While it’s fine for us to enhance our hatred of Indiana and refer to Kelvin Sampson as Satan’s Spawn as I described above in order to take care of the fresh open wounds of this spurning by Gordon for the time being because it is definitely a major deal, I hope that we’re still not harping on this same story five years from now. Illini basketball and Illini Nation are strong, so let’s reflect that from this point forward.

6 thoughts on “Hoosier Fleecing: A Q&A with Frank the Tank on the Eric Gordon Debacle”