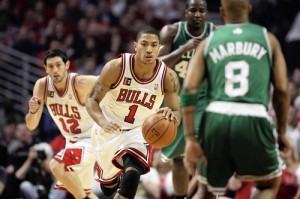 With all of the people that have been jumping on the Blackhawks bandwagon (which halfway includes yours truly), it’s been easy to forget how many people still love the Bulls in Chicago.  In my opinion, when all things are equal (understanding that a less popular team that’s doing extraordinarily well in a particular year is going to receive more buzz than a more popular team that’s performing poorly at the same time), the Bulls are third in the overall Chicago sports pecking order behind the Bears and Cubs, but that’s been tough to observe these past few months with the team needing a surge after the All-Star break to secure a .500 regular season record and the concurrent Hawks renaissance and high expections for the Cubs, White Sox, and Bears.  However, the Bulls’ literally heart-stopping playoff series with the Celtics is likely going to return the pecking order back into normalcy as the general public starts to truly understand how special of an athlete Derrick Rose already is at 20-years old and that we’re witnessing a young team on the ascent.  Certainly, there are a number of issues with this club (as I’ll get to in a moment), but I’m really enjoying how the town is buzzing about the Bulls again (speaking as someone that followed this franchise intensely through a whole lot of dark days over the past decade and is anything but a bandwagon Bulls fan).  When I went to the Bulls-Lakers game at the United Center last month, it was apparent that the sold-out crowd (whether they were cheering for Chicago or L.A.) was mostly there for the chance to see Kobe Bryant and Company.  Now, though, the Bulls (and specifically the magnificence of D-Rose) are becoming an attraction unto themselves, which means that tickets at the United Center are going to become a whole lot harder to come by.  Here are my thoughts on the series that’s tied up at 2 games apiece so far:

Boxing analogies applied to other sports are all too commonplace, but in the case of this series, it’s entirely appropriate.  Outside of the horrific game 3, these games between the Bulls and Celtics have been about withstanding multiple punches and who can throw the last knockout blow in the end.  As emotionally draining as these games have been, it’s the first time in a whole long time (maybe since 1998) where it’s a whole lot of fun to be a Bulls fan!